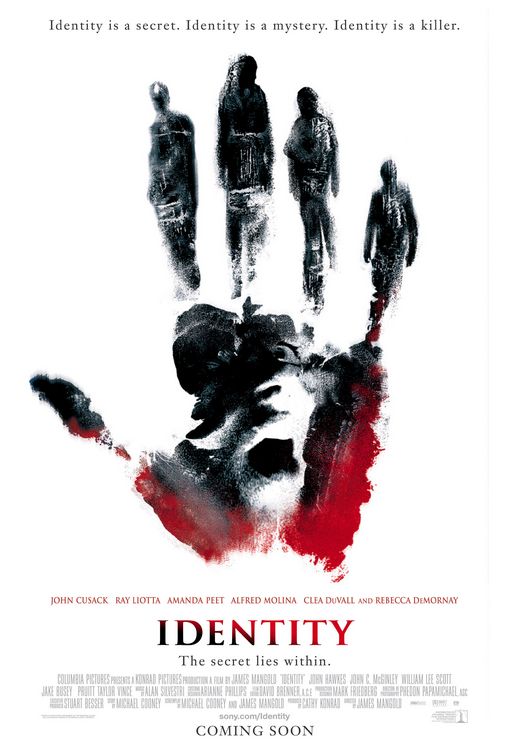 WRITING (Michael Cooney): This script may be Shymalan’s wet dream. The course this story took me through was incredible and one that was truly unexpected. The dialogue was a bit clunky and a little poorly written, but the overall course of the plot and the structure of the movie is great. At first I thought everyone was just annoying stereotypes, but then when the twist came that they are all part of Malcolm’s disjointed personalities, it made sense. It turned the “strangers in a room” mystery and flipped it on its head. 7/10

PERFORMANCES (James Mangold): I want to start by saying that Ray Liotta was incredible. His acting in this was great and overshadowed everyone else’s performances. John Cusack and everyone else did a fine job. They had bad moments where they seemed to ham it up, but otherwise they were fine. 7/10

CINEMATOGRAPHY (Phedon Papamichael): At first, I thought the lack of establishing shots was an annoying mishap, but when the twist came that it was all in Malcolm’s head, it was a brilliant creative choice. The rest of the cinematography is used in part to mask the mystery of the movie and it worked great. The last shot we see, as well, with the car parked on the side of the road, is stunning. 10/10

EDITING (David Brenner): I am very happy with how this movie was edited. It stayed on a single shot when people were dying and it was never too jarring. Dialogue was edited well and nothing stood out in a bad way. There were even some creative moments where it cut back and forth between the court hearing and the scene at the motel beautifully. 10/10

VISUAL EFFECTS (Robert Stromberg): Peoples’ deaths looked phenomenal, especially just being a small 2003 film. Nothing looked bad in any way and all VFX looked seamless. Also, if what Malcolm was doing with his eyes was done in post, then it was flawless. 10/10

ENJOYMENT: This movie was a rollercoaster. It was a thrilling mystery that I enjoyed every moment of. It really encapsulated me in the story. The twists and the ploys were all well-executed and I loved it. 10/10

MUSICAL SCORE (Alan Silvestri): I wanted more from this score, to be honest. It’s average. It doesn’t add much and it’s more of filler to help assist with tone. I didn’t notice anything special or outstanding about it, but it wasn’t bad. 5/10

SOUND (Jim Stuebe): There were a few things that annoyed me about the sound design. The gun shots were the overused gun effect that is in many other films. The jump scares were also annoying as they were accompanied by the loud BWANG sound effect. The mixing was great, though. 4/10

PRODUCTION DESIGN (Mark Friedberg): I thought the production design of this movie was alright. The sets were well-designed, but weren’t memorable. That could have been done to assist the concept that it was all in his mind, similar to how there wasn’t a single establishing shot in the whole motel part of the movie. 9/10

OVERALL: This film has an incredible story accompanied by very creative decisions. Unfortunately, it doesn’t meet its full potential in aspects such as acting, sound, and dialogue.