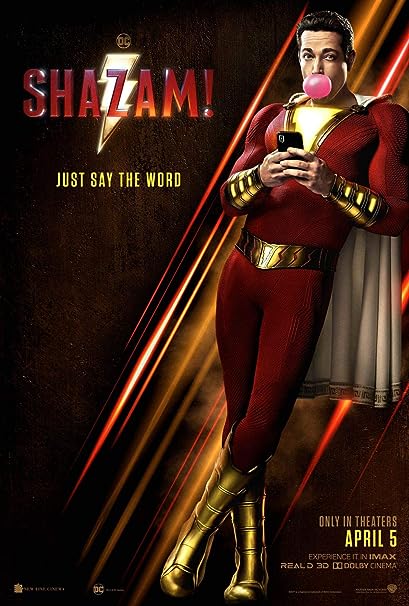 WRITING (Henry Gayden/Darren Lemke/Bill Parker/C.C. Beck): This film is very clearly an homage to early 2000s superhero films and it is completely charming in doing so. Everything involving Shazam is incredible. The writing of him finding his powers and his relationship with Freddy is well-done and feels natural. The beginning, however, suffers from some cheesy dialogue writing, but it quickly resolves itself once Billy is introduced. Going hand-in-hand with that is the writing for the villain, Sivana. He has a motivation, but his goal is not present at all. He seems to just be Bad Guy (trademark). But everything else in this movie was excellent. 7/10

PERFORMANCES (David F. Sandberg): Zachary Levi is amazing as Shazam in this film. His portrayal of a child-turned-adult superhero is perfect. I couldn’t imagine anybody else in this role. The rest of the kids are great as well. Jack Dylan Grazer does a fantastic job as Freddy, giving an incredible amount of emotion. Even Mark Strong gives us cliche bad guy to perfection. 10/10

CINEMATOGRAPHY (Maxime Alexandre): The cinematography of this film never got intrusive. There was never any moments of poor cinematography that I noticed. There were even some stunning shots while Shazam was flying. Unfortunately, though, it never went the extra mile to be more than just a lens for us to see through. 7/10

EDITING (Michel Aller): I can say that the editing for this film is great because I never really noticed it. It flowed smoothly and seamlessly from one shot to another, never skipping a beat. The color grading was also well-done, straying away from the dark and brooding colors that we’re used to from DC. 10/10

VISUAL EFFECTS/SPECIAL EFFECTS (Rodeo FX/RISE Visual Effects Studios/MPC/Proof, Inc/Mr. X Inc.): This film used a surprising amount of practical, special effects in this film that all worked out incredibly. The alligator people in the door were well-done and looked great. Also, the fusion between the CGI and on-location filming worked fantastic, especially the changing room scene. The only aspect of the CGI I didn’t like was the flying. It appeared too strange and abnormal. If you compare the flying heroes in this film to Superman in Man of Steel, there is a surprising difference. 8/10

ENJOYMENT: This film was a blast to watch. The comedy was on-point and, despite it being mostly spoken jokes, they felt natural and as if your friend from school was telling it to you. The ending was also hilarious and well-put-together. Overall I had a great time watching this film and it was incredibly heart-warming. 10/10

MUSICAL SCORE (Benjamin Wallfisch): I am a fan of Wallfisch’s scores and he knocked it out of the park with the heroic superhero music in this film. But what I had a problem with in this film wasn’t that. It was more-so the preexisting music that was used that lasted about five seconds to lead into a scene, and then faded away. Several popular songs started, lasted a couple seconds, and then vanished to not even be background music. It’s a strange decision that I think only hindered the movie. 6/10

SOUND (Bill R. Dean): The sound mixing and design were both fantastic. We were given well-mixed and creative sounds that helped elevate the film to be a great sounding superhero film. 10/10

PRODUCTION DESIGN (Jennifer Spence): A lot of work went into the production design of this film – from Shazam’s costume, to the cave, to the small sets like the fair. There was a lot of detail put in there to make each part of the production feel lively. 10/10

OVERALL: ‘Shazam!’ is a tasteful homage to the early 2000s that shines as bright as Shazam’s lightning bolt. The characters and comedy are all perfectly composed and brought together by brilliant performances and production design. There is a bit that could have been improved, but if you’re looking for a great time, this is it.